"Beautiful" is Heading Down Under

Producers of the Tony-winning musical Beautiful – The Carole King Musical  have announced that the show will make its Australian premiere at Sydney’s Lyric Theatre beginning in September 2017.

“I’m thrilled to see it travel across the world to Australia, where I hope audiences down under will treasure it as much as I do,” commented Carole King in a press statement.

We are thrilled to announce that after nearly three decades, Carole King came back to London to headline the SOLD OUT concert at BST Hyde Park !  Not only that...for the very first time, she performed Tapestry in its entirety! On Sunday, 3 July 2016, Carole was joined by the amazing Don Henley, as well as Louise Goffin, Michael Kiwanuka, Ed Harcourt, Rae Morris, RY X, Ward Thomas, Billie Marten, Flyte,Clare Maguire, Isaac Gracie and Meadowlark. 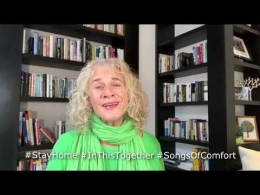 I want to acknowledge the passing of Ellis Marsalis Jr. a gifted pianist and the patriarch of a jazz legacy that co… https://t.co/Lpypyaqo1Z
April 3
@Carole_King #SongsofComfort https://t.co/3WTNV5HhB2
April 2