Carole King Honored As MusiCares Person Of The Year On Jan. 24, 2014

Carole was honored as the 2014 MusiCares® Person of the Year in recognition of her extraordinary creative accomplishments as well as her significant charitable work, which has included a range of philanthropic activities over the years.

In addition to her continuously evolving musical career, Carole is actively involved with environmental organizations in support of forest ecosystem protection as well as a range of political causes.  Read the NRDC's special acknowledgement to Carole and watch Carole's message urging the public's participation in calling for clean energy solutions, here.

"We are honored to celebrate Carole King as the 2014 MusiCares® Person of the Year," said Portnow. "Her contributions as a songwriter and performer have truly changed the landscape of pop music, and her philanthropy speaks volumes about her generosity and personal passions. We are also grateful to the extraordinary artists who have announced their desire to be a part of what will undoubtedly be a magical and inspiring evening."

"Carole's artistic output is remarkable in its depth. Her influence and charitable legacy are equally impressive, and her approach to art and life is enthusiastic and joyous," said Silva. "It is going to be an exceptional MusiCares Person of the Year tribute, and we also want to express our gratitude to our tribute chairs and musical director whose participation will ensure the success of our annual benefit."

When Carole took the stage, she was accompanied on one song by Berklee College of Music student Ahmad El Haggar from Egypt. They performed a Middle Eastern-style version of the music legend’s song “Home Again.” The new arrangement was written in collaboration with 25 year-old El Haggar specifically for the event.

El Haggar is a vocalist and oud player from Cairo, Egypt, who met King last spring when she received an honorary doctorate at Berklee. He was assigned to be her chaperone and they immediately connected. When King learned that El Haggar is Egyptian, she shared with him her interest in Arabic music and said she wished someone would create an exchange in which Middle Eastern and American bands perform together in each other’s countries.

Proceeds from the 24th annual benefit gala dinner and concert — held in Los Angeles during GRAMMY Week two days prior to the 56th Annual GRAMMY Awards — will provide essential support for MusiCares, which ensures that music people have a place to turn in times of financial, medical and personal need.

The MusiCares® Person of the Year tribute ceremony is one of the most prestigious events held during GRAMMY Week. The celebration culminates with the 56th Annual GRAMMY Awards at Staples Center on Sunday, Jan. 26, 2014. The telecast will be broadcast live on the CBS Television Network at 8 p.m. ET/PT. 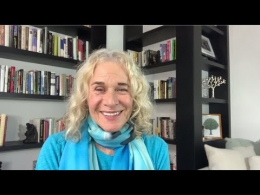