Fans of the wildly popular Gilmore Girls were treated to a revival of the series Friday, Nov. 25, as Netflix released Gilmore Girls: A Year in the Life, a four-part revival that will take fans back inside Stars Hollow.  "It's a story about women at crossroads in their lives," Sherman-Palladino says. "It's going to have more weight and more emotion, because there's more time and when you've got time, you don't have to truncate moments."

In her cameo appearance, Carole King, who re-recorded her hit song "Where You Lead, I Will Follow" with her daughter Louise Goffin for the show in 2000, reprises her role as Sophie Bloom, the owner of Stars Hollow’s music store, in the third episode titled "Summer."  In "Summer", Sophie appears at the town meeting and is one of the first to sound enthusiastic about Taylor Doose’s idea for Stars Hollow: The Musical.  Louise Goffin also makes a cameo appearance on the episode as troubadour, "Louise".

To read more about this episode, please visit EW.com.

For more information by Louise Goffin about the episode and the "Gilmore Girls" theme song, visit Bustle.com and Buzzfeed.com

Gilmore Girls: A Year In The Life 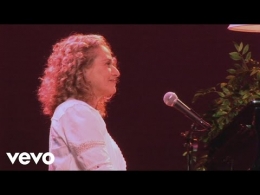 Happy First Day In August https://t.co/c2EgwmGxrK
August 1
Repost from @cbssundaymorning • Jennifer Hudson pays tribute to the Queen of Soul with her performance in the new b… https://t.co/F5mjK1EB34
July 31