Abby Mueller, who recently completed a run as star of the touring company of Beautiful—The Carole King Musical, will graduate to the title role of Carole King in the Broadway company starting March 7th, along with Evan Todd who joins the cast as Gerry Goffin. She is the sister of the show’s original star, Tony Award winner Jessie Mueller, who is currently starring in Waitress.

Abby will step into the role of Carole King as the current star, Chilina Kennedy, takes a break to headline the show in her hometown of Toronto June 27–August 20. Kennedy is scheduled to return to the Broadway company following the Toronto run. Mueller made her Broadway debut as an understudy in Kinky Boots, and took over several roles including Pat and Trish.

Todd, who takes over from original Broadway cast member Jake Epstein, returns to the New York stage after his debut in Heathers at New World Stages. Known for Disney’s Liv and Maddie, he also starred in 4th Man Out, and has been seen in films such as Grumpy Cat’s Worst Christmas Ever, Damsel, and ABC Family’s Switched at Birth.

"Beautiful: The Carole King Musical" received seven nominations and two Tony Awards in 2014 and the Original Cast Recording of "Beautiful" won a Grammy in 2015 for Best Musical Theater Album. The Broadway production has broken every box office record at the theatre, recently becoming the highest grossing show in the venue’s history.

The North American touring cast of "Beautiful" is garnering critical acclaim as it wows audiences across the country.

"Beautiful" will make its Australian premiere at Sydney’s Lyric Theatre beginning in September 2017. 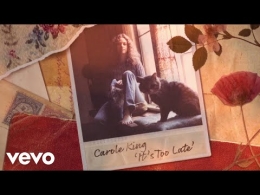 🙏🏼 @washingtonpost & #tanyapearson https://t.co/GFXNoAcVmC
February 27
Order Tapestry on vinyl! Or one of our 50th Anniversary Bundles that include items exclusive to the Official Carole… https://t.co/mtyOqepjSr
February 26